A History of the Ford F-150 Over The Generations

A generational breakdown of North Americas most popular truck.

The Ford F-150 and its thirteen generations have a rich 70+ year history. In fact, it’s one of the most celebrated histories in North America.

In case you didn’t know, the Ford F-150 has been a top-selling pickup truck for over 42 years. More than 40 million people drive it worldwide and when it comes to reliability, this truck stands out amongst the competition.

Since its humble roots, each evolution shares the same qualities that popularized the truck from the very beginning: affordability, fuel-economy and towing-capacity.

As of today, the F-150 is the best selling vehicle in Canada. And that’s a big deal.

In honour, we’ve put together a brief history of the generations of the Ford F-150 and what’s to come in the future.

It’s no secret that truck body styles have changed significantly over the years, however, its hard to believe that the popular Ford F-150 originated from the very first F-Series.

Introduced in 1948, the new and improved F-Series came as a much-needed replacement for the previous car-based pickups. According to numerous magazine articles and ads (like the one below,) this series became a favourite among America’s farming community and carried the designation of F-1 through F-8.

Here’s a quick breakdown of the packages available:

Staying ahead of its competitors from the beginning, the F-Series came equipped with some pretty techy features, including a manual transmission, driver and passenger side windshield wipers and a foot-plunger windshield wiper.

Advertised as the perfect vehicle for both the farm and the city, the 1948 ads pushed the theme of “newness” as well as economy, durability and the low cost of ownership.

With Americans going gaga over the truck, Ford realized that they were clearly onto something. That’s why in 1953 the automaker presented a complete redesign for the booming F-series. The truck now came outfitted with new engines, an updated chassis, roomier seats and new modern features (radio, dome lights and armrests – go figure!)

With America’s farming community in mind, the new redesign focused on living-room comfort, easier maneuvering, towing-capacity and a gas-saving engine.

Additionally, the flathead engine in the F-100 was upgraded to a new 239 CID overhead valve Y-block V8 engine, which got it the nickname of “Power King.” However, it was quickly replaced in 1954 by the 279 and 317, which introduced the power of steering as an option for the first time ever.

Prior to its redesign the following year, Ford decided to sell a one-year-only body style in 1956, a rare addition that featured wrap-around vertical windshield pillars and low gross vehicle weight ratings of each model. Moreso, for the first time in the truck’s history, seat belts became an option to try out.

Prepare to do a double-take, as the third generation of the F-series brought on a new, modern-looking body style. The series featured a front fender that became part of the truck’s body, while the hood was integrated into the bodywork. A styleside bed and a steel bed floor were also added.

This new look became the clear-cut truck staple for the next 20 years that, frankly, was unimpeachable.

The most significant change for this generation came in 1959 when Ford decided to manufacture four-wheel-drive systems for their pick-ups, making it easier for farmers working in all sorts of conditions.

New adjustments were also being made to the seat covers, adding more comfortable padding for longer drives. While a horn ring and white steering wheel were also included for a more updated look.

Once again, the fourth-generation F-series emerged with much to admire! The front-runner in the truck market now came sleeker and wider than its predecessor.

The new evolution introduces several firsts. The body was modified to be longer and lower in appearance to accommodate the Twin-I-Beam front suspension. This new change allowed the front wheels to run independently of one another, meaning a smoother and safer ride.

A 4-door crew cab model also emerged in 1965, introducing the “Ranger” to the Ford lineup. It featured bucket seats from the Ford Mustang, softer suspension, detailed styling and sophistication.

Ford continued to improve its truck lineup by making 3 new trim levels available: Base, Custom Cab and Ranger. Amid Federal Regulations, Ford extended the cab by 3” and added reflectors to the truck bed.

In 1969, a new grille design became available, along with an optional 302 Windsor V8 engine. The new Ranger XLT was also introduced as a top trim level, along with the F-250 camper.

The camper quickly took over as a staple of the generation, being marketed as a work truck by day and road-trip truck by night. The camper came with optional AM/FM Radio, a more comfortable cab than ever before and Ford’s famous Twin-I-Beam independent suspension.

This may not seem like a shock, but the sixth generation came with more significant changes:

The top-rated truck manufactured also decided to add a new package, the “SuperCab,” which made its first debut in 1974, offering six-passenger seating and a completed Dodge’s Club Cab.

The biggest surprise was announced for 1975, the year the Ford F-150 finally came out. This moment, as we now know it, changed truck history forever.

Despite the popularity of the sixth generation, Ford decided to take on a complete vehicle redesign, starting with the engine. A more fuel-efficient and powerful engine was brought on board to provide greater towing capacity for the truck.

Here is a quick breakdown in highlights:

Although the body style was carried on from the previous generation, the interior was completely redesigned for a more comfortable and modern feel.

Ford also included better aerodynamics, along with a rounded front clip, softer lines around the fender arches and the rear bed.

Moreover, the long-overdue 5-speed manual transmission was added by 1987, while the F-Series 4.9L inline 6 was converted to fuel injection. Finally, in 1989 a 4-speed electronically-controlled automatic unit replaced the C6 3-speed automatic.

In 1988, the Ford F-150 became the first pickup truck to be sold as a non-carbureted engine and the F-Series was established as being the nation’s best selling vehicle

Once again, a significant facelift was in the works. The FlareSide bed was reintroduced as an option, along with a lower hood line, more advanced aerodynamics, newly designed fenders, grille changes and interior upgrades.

As the 75th anniversary of the 1917 Ford Model TT was approaching, the 1992 anniversary package offered a stripe package, an argent coloured step bumper and a special 75th-anniversary logo.

In 1994, the model offered an updated dashboard with the addition of a driver’s side airbag. New hi-tech options were also introduced, like a remote keyless entry with alarm, power driver’s seat and a compact disk player.

By 1996, Ford had overtaken GMC and Chevrolet for the first time in a decade by reaching the 800,000 trucks sold mark.

This time around, Ford decided to create two segments for its trucks – the F-150 focused on personal use, while the F-250 and F-350 became classified as working-class trucks.

Fuel-economy and comfort became a staple in the 1997 F-150 when aerodynamics were brought in. Around this time, the 4.9L inline was also replaces by a standard V6 engine.

Amongst the new additions was the independent front suspension, new chassis and greater rear seats.

In 2004, Ford redesigned the body, giving all F-150’s four doors (regardless of the cab size) with the rear doors on the regular cab providing access to behind-the-seat storage. The Triton engine was also introduced, along with a never-before navigation system.

This generation received the “Best Pick” award from the Highway Safety’s Frontal Offset test, along with Motor Trend magazine’s Truck of The Year Award in 2004.

With a record-breaking number of F-150 being sold, the twelfth generation came with many new upgrades to both the interior and exterior. The pickup featured a new three-bar grille, roomier interior, a lighter weight chassis and a V8 engine (which became standard on all F-Series models).

In 2001, a 3.5L direct-injected twin-turbo EcoBoost V6 was offered as an option in the F-150 and all engines came equipped with a new six-speed 6R80 automatic transmission.

This brings us to the present generation. Ford is still striving to create more fuel-efficient and more powerful-trucks, changing most of the body components to aluminum. This not only dropped 750 pounds but made the truck less prone to corrosion.

Ford also introduced its first Diesel engine and became the very first pickup to receive Adaptive Cruise Control. This feature has radar sensors that monitor the distance between the vehicle and activity in front – forming a safe barrier if any activity is detected.

A more efficient base-engine was also added to include a 3.5L V6 and the 2.7L EcoBoost twin-turbo V6 and 3.5L version. For more power, the 5.0L V8 is still available.

What makes the Ford F-150 so popular?

The debut of the 14th generation Ford F-150 will most likely take place in late 2020. This means that we’ll likely see it on showroom floors in early 2021.

Here are a few spy shots, while you wait (courtesy of carcoops.com). 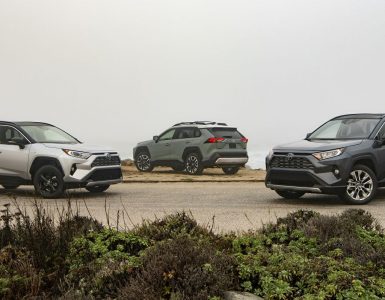 If you’ve been shopping for an SUV for, say, more than five minutes, you know that there are plenty of options available. In fact, over the past five years, multiple automakers have ditched sedans and build out...

Customer Corner: Why Customer Satisfaction Is Our #1 Priority

How Auto Financing Can Fix Your Bad Credit

5 Must-See Places In Canada To Explore This Fall

10 Road Trip Friendly Vehicles That You Can Drive Today